Robot Colony is a part of Singapore Robotic Games 2010, involving all tertiary school teams in Singapore.

In this project, we were building strategic algorithm for a pair of cooperative robots to search, detect, sort and deposit pellets on a designated arena.

The arena is as illustrated below, with two "Start Area" where each robot initially start task, two "Delivery Pocket" for a specific color of pellets. Colored pellets represents two different kind of garbage, and they are randomly placed on the platform. Two robots have their own zone of navigation where they are not allowed to cross the boarder("Zone1", "Zone2"), and they share a common zone where they both can navigate("Common Zone"). The goal is to collect pellets at own zone, and exchange colors when necessary at common zone, and deposit pellets to the specific pocket.

I worked as the team leader and lead programmer, and prepared 2 different sets of strategic algorithm using C  and MPLAB® IDE from scratch. Eventually, we won championship and first runner-up in Singapore Robotic Games 2010. The video below shows the actual competition of champion, where we successfully collected 49 out of 60 colored pellets, within 5 minutes. 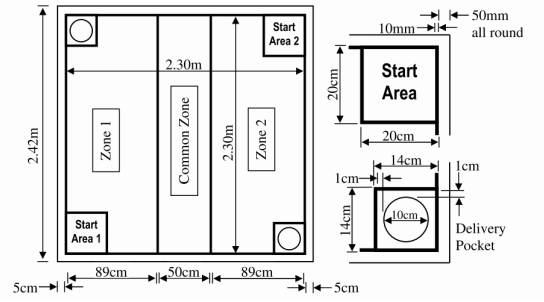